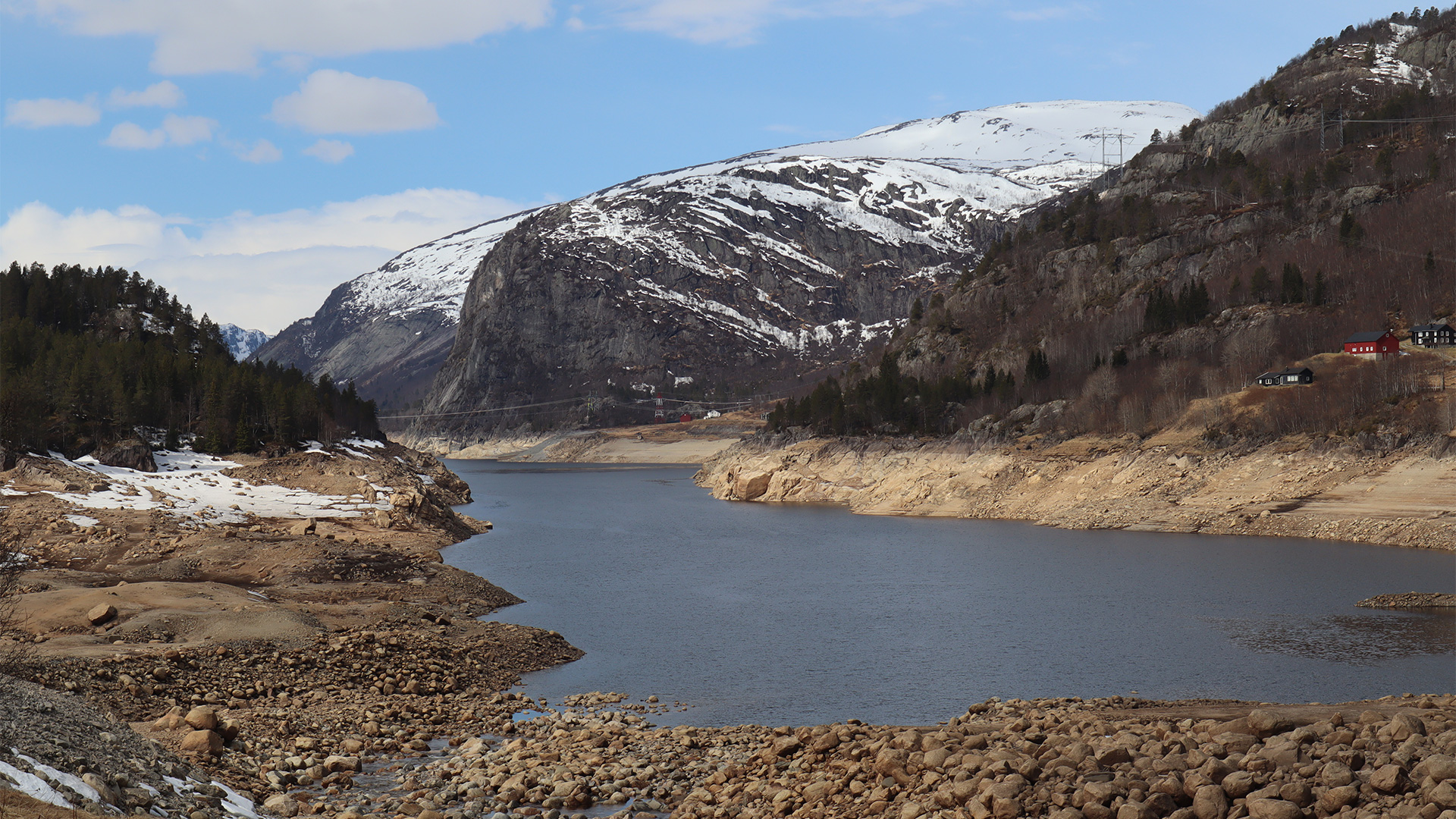 Wild reindeer have adapted to life in the high mountains where they can migrate freely between different seasonal grazing and calving grounds. Major changes have occurred in Norway’s wild reindeer areas over the last hundred years. This is especially true in Setesdal Ryfylke. Hydropower development, roads and human traffic have in many ways made the wild reindeer area a smaller place than it used to be. Migratory routes and grazing areas have been lost to dams, and many areas experience amounts of human traffic that simply deter the wild reindeer from visiting. Physical encroachments and traffic can pose problems each on their own, but it is often the combined impact that can be critical.

Norway has particularly good conditions for producing renewable energy in the form of hydropower, and this has formed the basis for much of the prosperity the country has seen over the past hundred years. Almost one fifth of the electricity produced in Norway comes from these mountain areas. At the same time, hydropower development has had a major impact on the mountainous area in the form of large reservoirs, construction roads and power lines. Several of the large reservoirs reduce the wild reindeer’s migratory possibilities between the grazing grounds, and some of the important grazing areas are now under water. The largest reservoirs that affect the wild reindeer are Blåsjø, Rosskreppfjorden, Svartvassmagasinet, Store Urar, Botsvatn and Vatnedalsvatnet.

The NVE atlas provides an overview of hydropower development and power lines in Setesdal Ryfylke.

Map over the area and construction and cabins in the area

Human activity in the area is a problem for the wild reindeer when it becomes systematic and of a certain level. Generally speaking, the bulls tolerate more disturbances than the cows. Disturbances can be particularly critical during the late winter when the animals have used up most of their fat reserves and the calving season is approaching.

GPS trackers fitted to wild reindeer combined with counts of human traffic have provided us with a lot of knowledge about how the wild reindeer react to human activity. By analyzing large amounts of data from several wild reindeer areas, we have established certain threshold values that tell us about how much the wild reindeer can tolerate when it comes to human traffic. For example, more than 30 passes per day on a path make it less likely for wild reindeer to cross the path. In practice, a path acts as a complete barrier if it sees as many as 100 passes per day. If there are tourist cabins located in an area, wild reindeer use will be reduced within a 10 km radius around the cabins. These threshold values are averages taken from many wild reindeer areas and must therefore be used with caution. For example, the threshold value of 30 passes on a path will be much lower if there are other influencing factors in the same area. Similarly, the number of people visiting tourist cabins will be very significant regarding the extent to which wild reindeer avoid the surrounding area.

There are large geographical differences in Setesdal Ryfylke regarding human traffic and it varies a lot throughout the year. In general, we have a good overview of roads and established trails, but not enough knowledge about activity outside of established infrastructure. In the protected area, there are 62 tourist cabins including mountain board cabins and cabins owned by Statskog. There is also a large trail network consisting of 650 km of waymarked tourist trails and 560 km of staked or groomed winter trails.

Counts have been conducted of how many people use the roads, trails and ski trails. The number of visits in some places are so high that they create an obstacle for the wild reindeer. For more information, see the chapter on mitigation measures below.

In 2016, CWD was detected for the first time in Nordfjella Wild Reindeer Area.
It is an extremely contagious and fatal prion disease that affects members of the deer family by attacking the lymphatic system and brain. Wild reindeer bulls are more vulnerable due to a lot of contact during the rutting season. It takes approximately 3 to 4 years for an animal to die after they have been infected. Infection between animals occurs via bodily fluids. Infectious matter can also lie dormant in the soil where wild reindeer gather, such as around sheep salt blocks.

A great deal of work has been done to map the prevalence of the disease and to limit it from spreading. For example, efforts are being put in to prevent wild reindeer from wandering between different wild reindeer areas. Other measures include reducing the population size and the number of bulls in order to prevent the disease from spreading. It is particularly important that the animals can use the entire wild reindeer area so that they are not forced to concentrate themselves in one limited area. Work has specifically focused on preventing wild reindeer from wandering between Setesdal Ryfylke Wild Reindeer Area and Hardangervidda Wild Reindeer Area, as well as reducing the number of bulls in the herd.
As of present, CWD has not been detected in Setesdal Ryfylke. You can read more about CWD at Hjortevilt.

Hoof rot in wild reindeer is caused by a bacterial infection that enters the body through tears and cuts to the skin. The bacterium causes inflammation of the soft tissues of the foot, but it can also affect joints and bone tissue. The hooves and feet of wild reindeer that have had hoof rot for a long time become deformed, so-called ‘club feet’. Hoof rot is rarely fatal in itself, but it reduces the animals’ general condition and often leads to emaciation and death from other causes. Due to the fact that wild reindeer live in herds, infections will often spread between individuals. Individuals that are in good condition and have a strong immune system will normally be less prone to hoof rot.

Hoof rot in wild reindeer has been detected at Setesdal Ryfylke and the disease seems to be on the rise in several wild reindeer areas. The causes are rather complex and are due to a combination of warmer and wetter weather, as well as poor health in some of the wild reindeer populations. Infection between individuals will normally occur more quickly when the herd is confined to a limited area over time.
You can read more about hoof rot at the Norwegian Veterinary Institute.

Climate change will affect the wild reindeer at Setesdal Ryfylke. Milder winters with more rain, and temperatures that fluctuate above and below freezing mean that the grazing grounds will often freeze over with a layer of ice. Occasionally, large amounts of snow may also fall in the high mountains making it difficult for the wild reindeer to dig down and find their food. Warmer summers will provide better conditions for insects and parasites which live on the wild reindeer. Large snowdrifts will melt much faster and there will be fewer places where the wild reindeer can cool themselves down and get away from the insects on the hottest days. This stresses the animals and they spend less time grazing.

In general, there isn’t enough knowledge about how sheep and wild reindeer influence each other. During the summer, there is usually an overlap regarding the plants they both prefer to eat. Approximately 60,000 sheep are put out to graze each year at Setesdal Ryfylke, but the concentration of animals varies greatly between areas. Most of these sheep can be found in the area around Rosskreppfjorden. All in all, the sheep grazing industry generates motorized traffic and a lot of activity in the central wild reindeer grazing area.

You can read more about the effects of sheep grazing by visiting the National Park Board’s website.